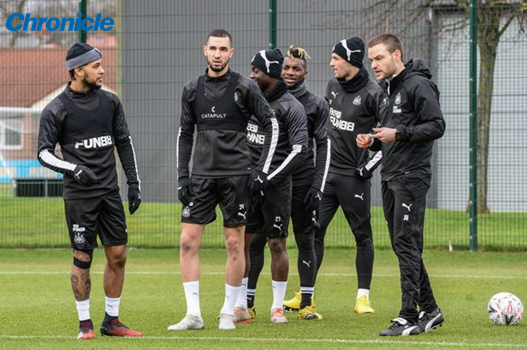 Newcastle United's season is hanging in the balance after the suspension of the season due to coronavirus, here's two key figures who will now have a big role to play

Newcastle United’s long-serving club doctor Paul Catterson will emerge as a key figure at the club now the Premier League season has been placed into cold storage while the country copes with the coronavirus crisis.

With more than a decade of experience at the club, Liverpool-born Dr Catterson has become a trusted and influential figure at St James’ Park – where he has been a full-time employee since he was promoted by Alan Shearer during his brief stint as caretaker boss.

A former Reds season ticket holder, he was at first a volunteer at the club while he was training at Newcastle University – helping out with reserve games before Shearer offered him the chance to work for the club on permanent basis.

Before then he trained in Accident and Emergency, helping to manage the aftermath of major incidents like car crashes and other life-threatening incidents. “I have seen some interesting things,” he told me back in 2017.

That experience of front-line NHS work will no doubt aid Newcastle’s club doctor, who was at the front of United’s response to what is now an international pandemic. It was on his advice that the club stopped their morning ritual of shaking hands – something that was introduced to try and set a tone of mutual respect among the players.

Steve Bruce described Dr Catterson as a “superb doctor” and he was highly regarded by his predecessor Rafa Benitez, who trusted him to run the medical department alongside his backroom team.

Currently, Premier League clubs are sharing information and being led by much of the same advice that is being given to the rest of the country but Newcastle’s approach is being led largely by Dr Catterson in tandem with Bruce and the club’s MD Lee Charnley – who was Newcastle’s representative at this morning’s Premier League conference call when the decision to postpone the season was taken.

Newcastle have been fairly ahead of the curve on the current crisis. The first to announce a handshake ban, Bruce was also the first manager to speak of behind-closed-doors games being “inevitable”. And they issued detailed guidance to supporters early in the week ahead of what was presumed to be Saturday’s match – with club staff asking the Chronicle to help amplify the message to help preserve fan safety. But the situation accelerated rapidly and St James’ Park won’t host football for the foreseeable future.

United’s medical and sports science staff will now become important figures while the campaign is paused.

Although United have been criticised for the lack of investment in the training ground facilities, they have pioneered some groundbreaking work on big data in the field of nutrition and sports science in recent years.

Dr Catterson is at the head of Newcastle’s work with pioneering data firm Orecco, an Irish company who are partnered with elite sports and NASA, and use ‘smart data’ to assess and improve fitness, nutrition and immunity levels. The latter may well be crucial when United do eventually return to action.

Last year, Dr Catterson was awarded the Fabrice Muamba award at the North West football awards for his part in saving the life of former referee Eddie Wolstenholme, who suffered a heart attack in the tunnel at Burnley before a match last season.

There is also now a big role for the club’s Head of Sports Science Jamie Harley , who will be lent on to make sure that the Newcastle players retain their fitness levels during the enforced break.

United’s squad have all been handed individual fitness plans to follow during the two weeks they will spend away from the training ground – a sort of mini-pre season for many of them – and these will be tailored to the demands of the different squad members.

Remote data fed into apps like Soccer System Pro should be able to enable Newcastle to continue to monitor player fitness levels even while they work out remotely and United can make sure diet and nutrition is taken care of.

But like the rest of us, the club’s medical staff will be guided by Government advice as the uncertainty created by the coronavirus set to continue for weeks or even months.