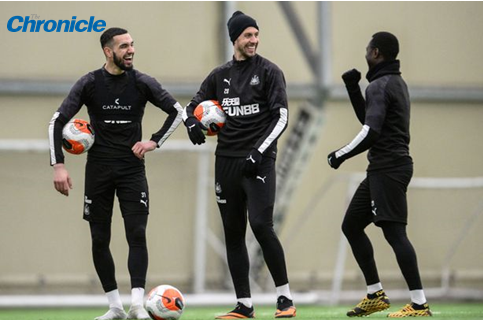 Football operations at Newcastle United's training ground may have been shut down but technology is helping the club to function amid the coronavirus outbreak.

The players have all been handed individual training programmes to follow and the smartwatches they have been given allow club staff to monitor their progress.

GPS data plays a crucial role in top-level sport today - ever wonder why players often wear those cropped vests when they are training with their team-mates? - and these sorts of numbers can prove priceless when it comes to detecting when a player is approaching the red zone, for example.

Daily digests are entered into a platform called Soccer System Pro, which is an interdisciplinary tool that connects the different departments within the club, and the Magpies were the first British team to use it.

The software essentially acts as a library for all the processes carried out with the players and integrates all the information, data and decisions taken by the club, whether it is player workloads, injury audits or their diets. Club physio Daniel Marti has referred to Soccer System Pro as 'an essential day to day tool' while fitness rehabilitation coach Cristian Fernandez believes it offers 'top class support'.

Crucially, GPS data and heart rate monitors from third party devices can be integrated which means all that information is just a click away and that saves a lot of time.

Crucially, having a tool like this guards against the loss of data - which, believe it or not, can happen given the pressures involved at this level.

"There are a lot of calculations that they cannot really hold in their minds," Gregori Ortanobas, Soccer System Pro's founder and CEO, told ChronicleLive.

"GPS data, for instance. Every single day, those guys have 25 players running. That provides a feed of more than 20,000 lines per player. How could you expect any human to keep all that data and interpret it and what it means? It's impossible, so we are just the support tool for their knowledge and experience."

This is far from the only bit of software Newcastle staff will be using while away from the training ground and although the club's talent spotters are obviously unable to embark on scouting missions right now, Wyscout will prove a useful supplementary tool for the reports they have already gathered from watching players in person.