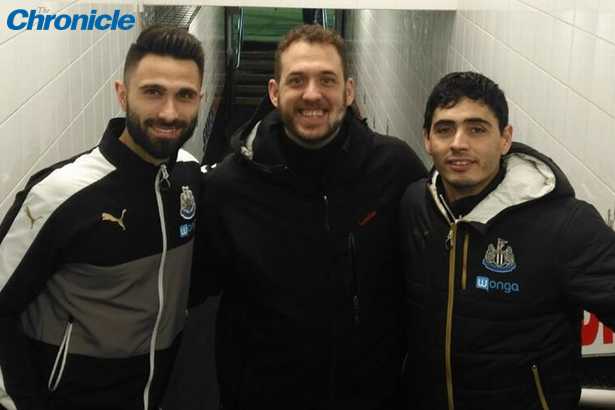 Newcastle United, Atletico Madrid and Valencia are just some of the clubs who use Soccer System Pro and ChronicleLive delved into what makes the software a little different

Tucked away on Gran Via de les Corts Catalanes sits Soccer System Pro's HQ. It is from this unassuming office in Barcelona that a small team of engineers, analysts and statisticians are supporting Newcastle United's training ground staff from afar.

The Magpies were the first British club to use this sports management service software, which has also been utilised by Atletico Madrid, Valencia, Real Sociedad, Spartak Moscow and Guangzhou Evergrande Taobao.

Soccer System Pro was developed by MDM Systems after CEO Gregori Ortanobas realised there was no such programme available in the sports medical field.

The interdisciplinary tool connects the different departments within the football club and acts as a hub for all work carried out with the players, bringing together the information, data and decisions taken by staff, including training workloads, injury audits and diets.

Newcastle physio Daniel Marti has referred to Soccer System Pro as 'an essential day to day tool' while rehabilitation fitness coach Cristian Fernandez believes it offers 'essential support'. So how does it help?

"We just contribute the tool, but the knowledge and expertise is all them," founder Ortanobas told ChronicleLive. "They are the masters. I don't know anything about being able to run a medical department or a gym.

"Of course, after seven years, I know a lot of content about medical matters, strength and conditioning and return to play algorithms but, believe me, I don't have the skills to deal with the players and their needs day after day.

"We do understand that. For us, it's really important to make sure that we're behind the scenes. We just provide the tool that pushes them one step further.

"At the end of the day, the players and the staff around them are human beings. They have a lot of pressure and, trust me, they feel it every single day. We support their decision-making processes with a better understanding of what's going on.

"There are a lot of figures and calculations that they cannot do or even hold in their minds. GPS is a good example. Every day, those guys have around 25 players training but GPS provides a feed of more than 20,000 lines per player. Can you imagine it?

"How could you expect any human to keep all that data and squeeze it, getting the right and meaningful insights out of it? It's simply impossible so we are just there, ensuring that they can cope with all the relevant information at the right moment in the right place."

Instead of combing through spreadsheets or making a call, this data can be accessed through one app so a player's clinical notes, physio interventions, isokinetic tests and scan results can all be stored in one timeline graph.

At this difficult time, when the squad are away from the training ground and doing their own individual programmes, after football operations were closed down at Benton because of coronavirus, the players can also fill in wellness questionnaires concerning sleep quality, muscle soreness, fatigue and stress levels.

"Newcastle are improving the medical department year after year. Basically, there are only two different ways to improve your medical department: either you manage less injuries or you return the player faster and strong," Ortanobas said.

"Once you get an injury, which in most cases is out of the reach of the medical department, although they suggest and advise, the decision is taken by the coaching staff.

"The only thing they can do is plan accurately the day the player will be back, share it with the coach and his staff and conduct a follow-up on a daily basis, reporting any improvement or delay according to what is set.

"One of the things we provide as a software when it comes to the return to play period is showing the player's bookmarks and many other parameters like GPS, blood tests, range of motion, strength tests, etc.

"That helps so much to monitor player's evolution. Of course, a player's emotional state or feelings still has an influence but from the medical department, there is no room for a gut decision. This is science and is based on proof science."

It was during Rafa Benitez's time at Newcastle that MDM Systems won the contract to work with the Magpies and while the Spaniard has since moved on, to Dalian Pro, club doctor Paul Catterson remains a crucial point of contact.

Dr Catterson has led the club's fight against COVID-19 - banning handshakes at the training ground last month, for example - and is highly-rated in his field.

Steve Bruce even went as far as to say that the doctor 'won us the game' against Southampton back in December after he stitched up Paul Dummett's split lip in just a couple of minutes so the defender could carry on, which meant that Newcastle still had one offensive substitution to make.

Sean Longstaff soon came on and Southampton goalkeeper Alex McCarthy could only parry his effort from distance into the path of Federico Fernandez, who fired home a late winner. These are the fine margins.

"Dr Paul Catterson is a top guy. He always treats us extremely well," Ortanobas added. "The medical department is one of the jewels of the club for me."